I always try to watch the Perseids meteor shower with the peak date of August 12. But this year I was too cloudy to watch the shower. I tried to ‘hear’ them with the help of a carrier BRAMS in Belgium on 6 meter (49.970 MHz) but I am too ‘far’ from the carrier to hear the pings. Via Spaceweather.com I know that the Air Force Space Surveillance Radar (USA) is scanning the skies above Texas. When a meteor or satellite passes over the facility--ping!--there is an echo. Using Argo V1 I can see the pings also and because of capturing I can count the meteors. The difference between my local time and Texas time is -7 hours. Best time to count meteors is in the early morning, the best chance to catch the maximum of meteors. With a time difference of -7 hours is for me around lunch time. Today I counted 69 meteors in one hour. If they all belong to the Perseids, I don’t know, because Kappa Cygnids peaks at August 17. But the Zenithal Hourly Rate for the Perseids is 90 at the peak. And the ZHR of the Kappa Cygnids is 3. So I think the most are Perseids pings. On the left photo I heard a nice ‘classical’ ping. On the right photo it sounded as a whistle. The vertical line on the photo is a carrier.

This morning I didn’t receive any signals on 20 meter with WSPR, though my signal was spotted by VK6ZT. That is very strange. Best distance on 160 meter last night WSPR was F5JNV 636 km. 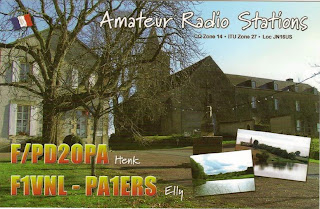 Last night I made a qso on 40 m with PSK31 with F/PD2OPA Henk from France.