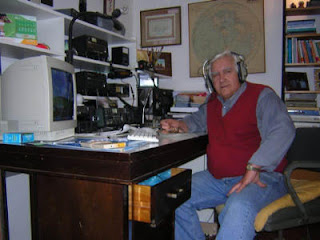 After a period of poor conditions, I worked hardly stations from outside Europe, I did worked last night two new DXCC with JT65A on 20 meter. CX4CR Mario from Montevideo, Uruguay (see photo) and PY9FP Francisco from Porto Estrela, Brazil. Also worked ZC4MIS Mike (KF6RCP) who is on vacation on Cyprus. He was running 5 watt (FT817) with a Buddistick.

On 40 meter I met Jeroen F/PHØFT with SSB. He was in the near of Marseille, France. We had a nice chat, though a lot of QRM on the frequency.