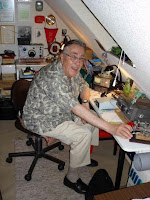 I heard 4Z5NX/QRP calling CQ on 20 meter. He was calling: 'No QRO, only QRP' He was running 1 watt and I could easily copy him. I tried with 1 watt also to call him but he didn't hear me. I tried several call's on 20 meter, but without result. So I moved down to 40 meter and call CQ on 7030 KHz with 1 watt. DL7DO/P Ralf came back for me (Photo) he was with holidays along the Baltic Sea near Lubeck. Running 5 watts. My second QSO was with G4WSX John, who was calling me but I could hardy copy him (10 watts) but later on his signal was coming up to 599. It's always very satisfying to make contacts with very low power. On 17 meter I worked K8CW Alan from the USA with CW. 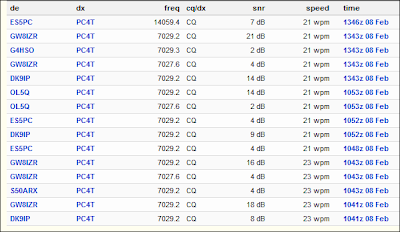 With Reverse Beacon Network I can where I was heard with my 1 watt CQ calls. Only once on 20 meter. On 40 meter more luck.
By Paul Stam PAØK