During the geomagnetic storm of Nov. 27th, a brief but intense G2-class event, amateur radio operator Peter Brogl of Fürth, Germany, experienced a strange phenomenon. Forty-six seconds after he transmitted his call sign at 7 MHz, he received an echo of his own transmission. "At first, I thought someone was playing tricks on me," says Brogl, "but I changed frequency, re-keyed my call sign (DK6NP), and got another echo." This went on for more than an hour, enough time for Brogl to make several recordings. First reported in 1927 by Norwegian civil engineer Jørgen Hals, long-delay radio echoes are rare and poorly understood. Unusual propagation conditions linked to solar storms is one of many possible explanations. Radio operators, if you experienced any similar phenomena on Nov. 27th between 1800 UT and 19:30 UT, please report your observations to Peter Brogl for correlation. [Source: Spaceweather.com]

For the first time I worked Japan. I was reported before with WSPR, but no real qso. Now with JT65 I worked JHØIXE with 25 watt on 14076KHz. He was running 30 watts into a 3 element beam. Other JT65 qso's today: OK2PDH, and EA3GJA. 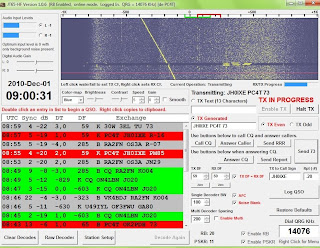