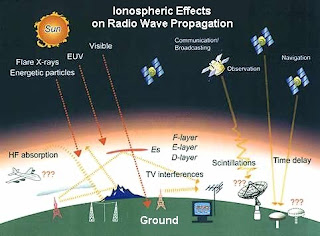 "Sporadic E is known to be a nuisance for HF propagation. By its presence, it can RF cut off from long paths via the F-region up around 300 km and thus disrupt long-haul communications. And the reflecting properties can be so great as to not only reflect RF from the top of the HF spectrum, to the annoyance of 28 MHz DXers, but also reflects RF in the VHF portion of the amateur spectrum, to the joy of the 50 MHz and 144 MHz DXers. I should add that some contestors love sporadic E as they can go to higher bands and make many short-haul contacts on bands that would be quite dead otherwise. All that from the fact that recombination is so slow for atomic oxygen and metallic ions." More >>>

Today propagations on higher bands were dramatically bad. When I turned on my transceiver I heard on 20 meter only 2 stations, I thought something was wrong with my RX. Tonight conditions were a lot better. On 20 meter I worked UX4IJ with CW and OM8ØØAB on 30 meter with CW.
By Paul Stam PAØK