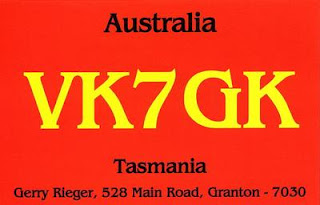 No, I haven't work Australia, but I did hear VK7GK on 40 meter this morning with a very strong signal (5-9) with ssb. There were a lot of guys calling him. I didn't even try. I did work OZ9QW, Bent from Aarhus, Denmark with ssb on 40 meter. He was running 600 watts. Also worked EI4IB, Nick from Mullingar, Ireland with ssb. He was calling CQ DX but wasn't successful. Normally, when someone is calling DX I do not break in. But there was no DX, so I gave a call. This afternoon I worked UA3IMS, Eugene from Kuvshinovo, Russia on 20 meter with ssb. Now the kids are coming from school and the easter weekend starts to begin. There is no time really for working in the shack, so I wish everyone a nice easter weekend.

Tonight I listen for a while on 40 meter. Well, the band sounds great without digestion. Hi. With CW I worked OK1XGL Petr from Ceske Budojovice, Czech Replublic; and GD4EIP, Colyn from Foxdale, Island of Man on 7018 KHz. And with BPSK31 I worked GØUZL, Chris from Blandford, England. I also heard YI9HU with BPSK31 but he got lost in the QRM.
By Paul Stam PAØK