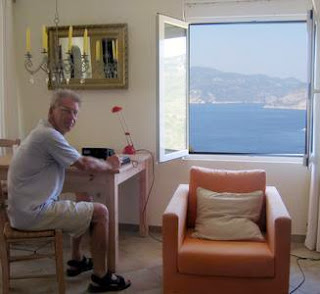 On photo PAØPMD, Peter from Haarlem, The Netherlands. I worked him on the 2 meter repeater of Zaandam. He was transmitting indoors with a handheld. He is also active from Greece, as SV8/PAØPMD, and from the end of may I will try to work him around 14.025 KHz. Via the repeater of Zaandam I worked also PE1RIH/M Bert from Hoogeveen. He was on his way to Emmen. PAØGDK, George from Krabbendijke, Zeeland with a discone antenna and 50 watt. PE1OAC/M, Bart from Opmeer mobile on the A10, Amsterdam. It was nice to work the Dutch stations with my indoor Whip antenna. Conditions were rather good for 2 meter.

This afternoon I worked GS3PYE/P Neil from the Isle of Harris, Scotland with SSB on 40 meter.
By Paul Stam PAØK